THE internet engaged in a collective ‘isn’t he adorable’ a few months back when it transpired actor Benedict Cumberbatch couldn’t say the word “penguins”. You can watch the video here. 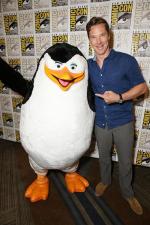 (The fact Cumberbatch had just lent his voice to a nature documentary about penguins — or “pengwings” — and is currently starring in the Penguins of Madagascar movie made the whole thing even better.)

So what does all this have to do with yesterday’s Victorian election, which swept Labor’s Dan(iel) Andrews into the premier’s office?

While conventional wisdom suggests the controversial East West Link and disputes about pay for ambos and firefighters played a key role in Labor’s win, it’s also possible Daniel Andrews flicked the switch to ‘evil genius’ and employed a bit of highly strategic, Cumberbatch-esque linguistic subterfuge in a bid to sway undecided voters.

Stick with me here, and check out this video of the Labor leader promising Victorian voters PUDDING. Yes, as in the moist cake stuff. Moreover, enough pudding to fill Melbourne’s Etihad Stadium.

On the surface Andrews simply can’t say the word “putting”, which is unfortunate given the ALP’s campaign was almost entirely built around the slogan ‘Putting People First’. But let’s not be so naive.

These political catchphrases are debated, dissected and focus group tested before ever being uttered in public.

Which means two things have happened. The first is that Labor strategists adopted this slogan in the full knowledge that Andrews couldn’t pronounce a third of it. This seems cruel, odd and somewhat self-defeating.

The second option is that the ALP’s savvy election strategists devised this particular collection of syllables in the hope some voters would be subliminally swayed by the promise of baked goods.