This review of Jonathan Green’s The Year My Politics Broke (Melbourne University Publishing) first appeared in The Voice.

As a detailed account of how politicians and politicking has veered off course in Australia over recent years The Year My Politics Broke isn’t an enjoyable read. But then, it isn’t meant to be: the book is designed as uncomfortable reading.

That veteran journalist Jonathan Green has managed to make it engaging at all is a real triumph. 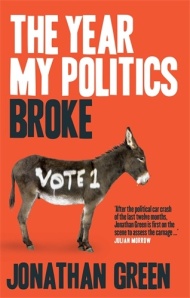 Early on in the book Green – the presenter of Radio National’s Sunday Extra and former editor of the ABC’s analysis website The Drum – states it is neither a diary nor campaign notebook, but instead “a running reflection of the current state of our politics”.

(The word “our” is crucial, as Green obviously believes all Australians bear some responsibility for the current state of national affairs. And that especially includes him, he says, “a minor league media participant”.)

True to his word, Green does not provide a blow-by-blow account of contemporary Labor rule, nor does the book read as yet another critique of Tony Abbott’s ‘just say no’ approach to Opposition. Instead, the book tackles issues thematically.

But the overarching (and most distressing) argument contained in The Year My Politics Broke is that our whole political system is now incapable of constructive action or compromise on the big issues.

“The assumption we make from the outside is that the political system will make a genuine attempt to reach some sort of resolution, to come up with ideas and policy settings that might advance these various courses,” writes Green.

“The troublesome truth,” he goes on, “is that sometimes the establishment of disagreement, the pursuit of a negative line [for its own sake], can have more political reward than sitting down and working the thing out.”

And all this at a time when the nation’s policy challenges – like climate change, tax reform or the treatment of asylum seekers – are only becoming more thorny.

“The challenges facing us today are so multi-dimensional and complex,” former Victorian Governor Alex Chernov told Voice in June.

“They tend to inhibit rather than encourage public discussion and the development of policies in relation to them.”

You’d curl up in a ball if it wasn’t all so important.

The only problem with The Year My Politics Broke is that it sometimes felt overly familiar. Green has a beautiful and unique writing style, but I would often read a passage with a distinct sense that I’d read it before (perhaps months ago on The Drum?).

It must be hard to write over a prolonged period of time and then produce a wholly original retrospective on the same topic (especially when you have a unique writing style). Green’s efforts are admirable.

That being said, perhaps the only way to truly do justice to the Rudd—Gillard—Are-We-There-Yet?—Rudd-Again years is to instil in the reader a sense of déjà vu.

The Year My Politics Broke certainly did that. Bravo.